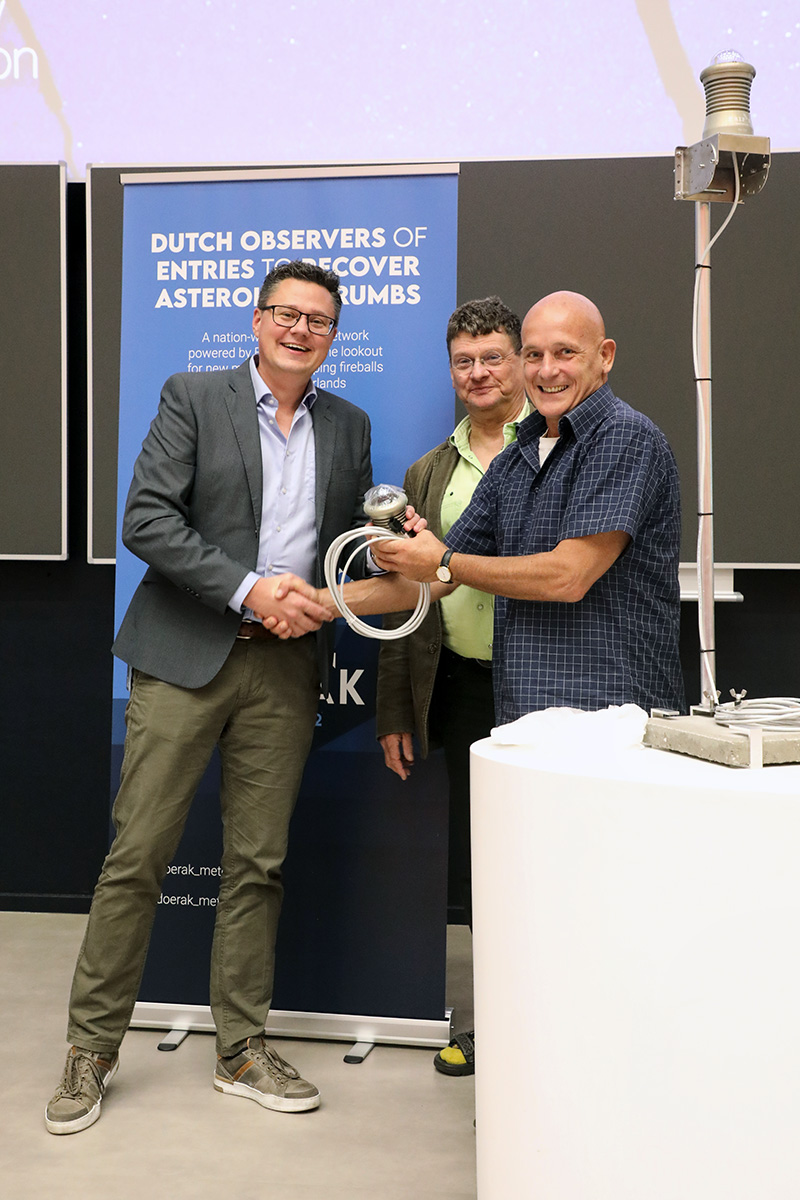 The coordination of the Dutch branch of the allsky fireball camera network ‘FRIPON’ has been handed over from ESA-ESTEC to the TU Delft. In a formal event ESA-scientist Detlef Koschny handed over the network to its new coordinator Sebastiaan de Vet of the section Astrodynamics & Space Missions.

FRIPON (Fireball Recovery and InterPlanetary Observation Network) is a camera network with allsky cameras developed in France. The main goal is to observe fireballs (very bright meteors) entering the Earth’s atmosphere, determine their orbits and predict possible meteorite impacts. Studying meteorites gives an unique and important insight into planet formation and the evolution of materials in the early solar system.

Transfer of network to TU Delft

Since 2018, a team of researchers from ESA-ESTEC in Noordwijk has coordinated the Dutch branch of this camera network. During an official handover on 1 September, the network was handed over to Sebastiaan de Vet at TU Delft, who takes over the role as national coordinator. Because of this transfer as well as to symbolize the ambition for further growth of the network, the network was renames ‘DOERAK’, which stands for ‘Dutch Observers of Entries to Recover Asteroidal Krumbs’.

On 1 September, chairman of the Space Engineering department Prof. dr. ir. Pieter Visser welcomed the attendees. Subsequently, Detlef Koschny (ESA) gave an introduction to the scientific and operational considerations for the type of observation networks such as FRIPON. Sebastiaan de Vet then gave a detailed overview of the Dutch network and the future plans. He focused on the activities around meteorite research that take place at TU Delft and other Dutch institutions, and how FRIPON will help with this. At the end of the program, there was a symbolic transfer of one of the fireball cameras.

The camera network in the Netherlands will be expanded from 6 to 11 active cameras, which results in national coverage. At this moment, there are 187 cameras active worldwide.