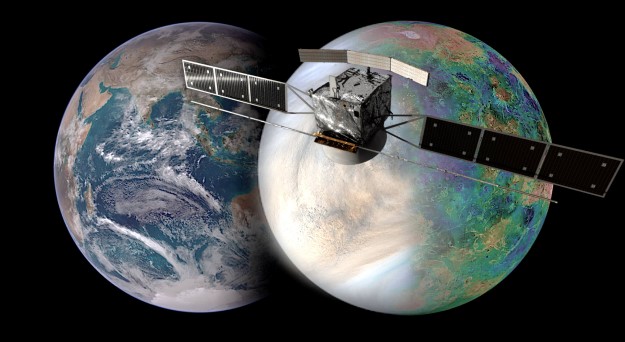 The European Space Agency (ESA) has selected the Venus orbiter EnVision as the fifth medium-class mission within its Cosmic Vision program. It marks the beginning of a new era of Venus exploration—last week NASA already announced two new missions to Earth’ sister planet. SRON and TU Delft are part of the EnVision consortium.

The spacecraft will orbit Venus during the early 2030s, taking measurements of the atmosphere, the surface and the subsurface. One of the main questions is why and when Earth and Venus became such different planets. While the Earth has oceans and a mild climate suitable for life, Venus is bone-dry and in most places the temperature rises to almost 500 degrees Celsius—due to an extreme greenhouse effect.

EnVision will use spectrometers to study gases, nebulae and clouds in the atmosphere. A radar maps the surface and subsurface, where researchers keep a close eye on volcanoes because any changes could indicate recent eruptions. SRON and TU Delft join forces to deploy their expertise in the field of spectrometer detectors and the Venusian atmosphere.

‘This mission will give a large boost to our understanding of Venus’ atmosphere,’ says Michiel Min, head of SRON’s exoplanet program. ‘Venus is very interesting because it is similar to Earth, but has become so different in so many aspects. With EnVision we will gain a wealth of knowledge for future studies of planets around other stars, and especially of our own Earth’s atmosphere.’

Daphne Stam (associate professor of planetary sciences at TU Delft): ‘Although Venus is the closest planet to us, it remains a mysterious world to researchers because of its thick atmosphere and unbroken cloud cover. With EnVision, we can perform detailed studies of the connections between the gases in the atmosphere, the sulfuric acid clouds and the volcano-rich, glowing surface. It gives us more insight into the evolution of earth-like planets.’